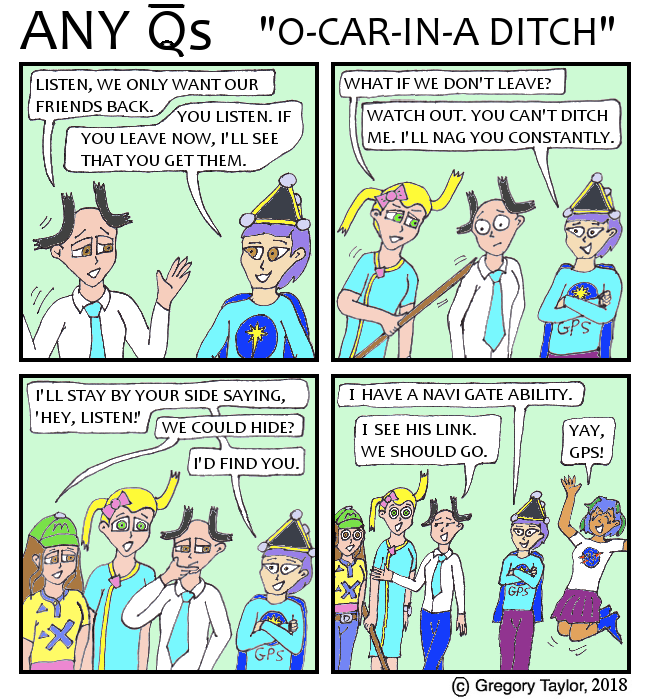 "Legend of Zelda: Ocarina of Time" is a long way to go for this joke. Hope you felt it was worth the journey.

FYI, if you only click on "next", you would have missed last week's Art Aside, with thanks to those on StArt Faire's Discord server. Related, StArt Faire is doing a Comic Awards Show Feb 10th (2pm EST) and looking at Any ~Qs Feb 15th (8pm EST). Mark your calendars.


RHYS: Listen, we only want our friends back.
GPS: You listen. If you leave now, I’ll see that you get them.
QCUBI: What if we don't leave?
GPS: Watch out. You can’t ditch me. I’ll nag you constantly.
GPS: I’ll stay by your side saying ‘Hey, Listen!’
SLOPE: We could hide?
GPS: I’d find you.
GPS: I have a Navi gate ability.
RHYS: I see his link. We should go.
EARTH-TAN: Yay, GPS!
Posted by GregT at 04:00 1 comment:

It's a Thursday at the end of the month! Granted, the last Art Aside we had then was at the end of May 2017, but whatever. Recently, I've been participating in weekly comic chats on the StArt Faire Discord channel. This included sign ups for a Holiday Swap in December, for drawing the art of other original characters. I suggested that whoever got me draw one of the Conics, or Logan, should a male be preferred.

Check out the cool drawing of ParaB ice skating, by Ellie!

So great! (I think the green gloves and leggings are a nice touch, given her dress. What about you?) Ellie even did a preliminary sketch of ParaB in another pose, which she shared with me as well:

You can check out more of Ellie's work at "The Tower". As for me, I drew characters from the comic "My Friends in Distantland", by Jen, and you can see her series at that link. Trust me, this image makes more sense when you have the context of her webcomic:

Thanks for checking out another Art Aside. Feel free to comment down below if there's other characters you want to see in the future. Also, if you haven't seen the new 2018 banner for the Facebook Page yet, go have a look (and maybe even like the page while you're there).

Next update should go Monday. I really should work on having a buffer, maybe.
Posted by GregT at 04:00 No comments: 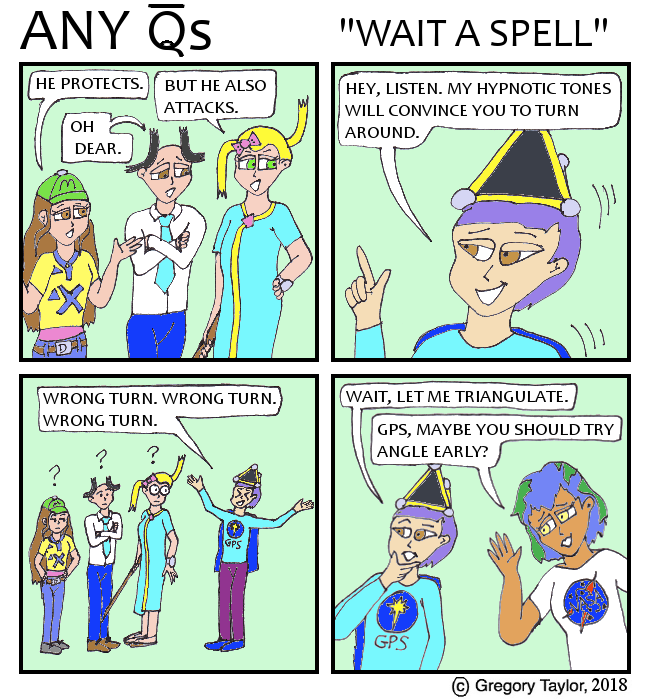 The "protec" and "attac" thing is another meme. I should stop overusing those. The better wordplay is on trying to angle late.


SLOPE (to Rhys): He protects.
CUBI (to Rhys): But he also attacks.
RHYS: Oh dear.
GPS: Hey, listen. My hypnotic tones will convince you to turn around.
GPS: Wrong turn. Wrong turn. Wrong turn.
(Slope, Rhys and Cubi all look puzzled)
GPS: Hold on, let me triangulate.
EARTH-TAN: GPS, maybe you should try angle early?
Posted by GregT at 04:00 No comments: 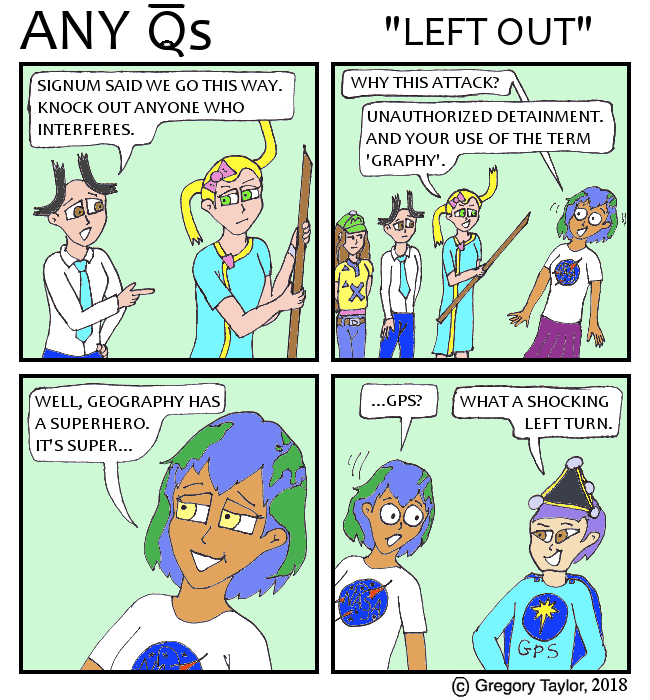 Earth-Chan is popular these days, so here's a variation. I'm not sure whether she lives in Geography and visits Science, or vice versa. Feel free to offer up an opinion.

RHYS (to Cubi): Signum said we go this way. Knock out anyone who interferes.
EARTH-TAN: Why this attack?
CUBI: Unauthorized detainment. And your use of the term ‘graphy’.
EARTH-TAN: Well, geography has a superhero. It's Super...
EARTH-TAN: ...GPS?
GPS: What a shocking left turn.
Posted by GregT at 04:00 No comments: 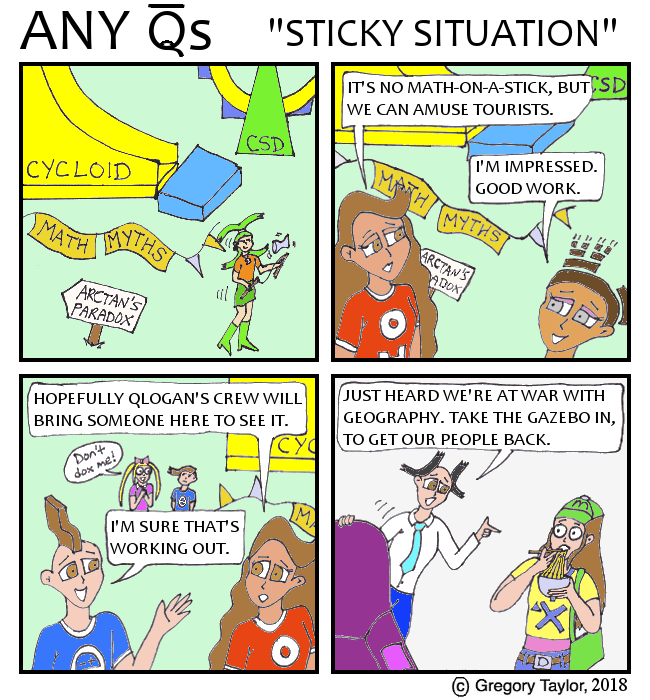 Math-on-a-Stick is an annual Minnesota State Fair event. Shoutout to @Trianglemancsd for his involvement there - and on Twitter he was also Tangent last Halloween!
If you came here direct from the last comic, you may have missed the Halloween and Christmas posts for 2017. There was also an educational comic roundup. I'm hoping to have regular updates again going forwards.

(Image shot of... fairgrounds?)
QSINE: It’s no math-on-a-stick, but we can amuse tourists.
CANTOR: I’m impressed. Good work.
QPARA (background): Don't dox me!
QSINE: Hopefully QLogan’s crew will bring someone here to see it.
ARCCOS: I’m sure that’s working out.
RHYS: (to Slope) Just heard we’re at war with geography. Take the gazebo in, to get our people back.
Posted by GregT at 04:00 2 comments:

Last year (2017), Ben Orlin of "Math with Bad Drawings" did a reader survey. One of the questions he asked was “What other web site do you consider most similar to ‘Math with Bad Drawings’”. You can find the results of that question posted at his site. Anything that got less then three mentions was relegated to itemized lists at the bottom, which is where this post of mine comes in.

After 6+ years of personifying mathematics, first as a serial ("light novel"), then as a webcomic, it's felt like an uphill battle to find any sort of audience at all. To the point where I've given up multiple times. Only to return.

Thing is, I'm sure I'm not the only one fighting to be seen by anyone, ANYONE at all. So, I figured, to start 2018, I'd offer a window into some of the other people out there trying to make a go of funny "educational-style" webcomics. Maybe you'll find something you like out of the following list.

Of course, if you're inclined to stick around after, I've also got a huge backlog of talking parabola bunnies here. 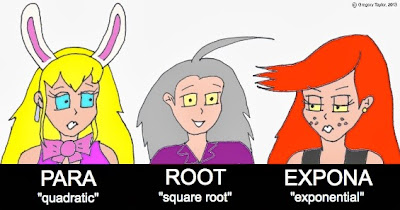 Here's the websites that were directly compared to Ben Orlin's blog (and had two or less mentions), which he listed under the category "webcomics". There's some I already knew about, but some I didn't, so you get the full set. Items in quotation marks were taken from the websites' own "about" page. Almost all of them are drawn in single panel or 4-panel style.

1. Indexed
“A little project that lets me make fun of some things and sense of others.” Currently running (since 2006). Left handed artist. Math related.

2. Brown Sharpie
“A comic drawn by Courtney Gibbons ... updated for 3 or so years before fizzling out. The archives remain for your viewing pleasure.” Began 2006, and despite ending in 2012, it has a few 2017 updates. Math related.

3. Abstruse Goose
“A webcomic ... that is all.” alternately described as “Strip cartoon about math, science, and geek culture.” Nebulous beginnings. Existed in 2010, it stopped updating in 2014.

4. Surviving the World
“A webcomic focusing on all shades of life, from science to literature, politics to sports, romance to religion, and everything else in between.” Currently running daily (since 2008).

5. The Oatmeal
By Matthew Inman, with a Facebook page having 4 million likes. Doesn't really need the publicity, but it was listed. Currently running (since 2009).

7. Incidental Comics
Book compilation is described as “an illustrated exploration of creativity”. Facebook page has 588k likes. Currently running (since 2009).

8. Unclipped Adventure
“Began as an illustrated travel blog, a way to record my global bicycle adventures in comic form.” Currently running (since 2014, began on blog).

9. Tabula Candida
“I teach history and when I teach I like to doodle on the whiteboard.” Currently running (since 2013).

11. Yahuda Moon
“Comic strip about a guy who lives on a bicycle and works at the Kickstand Cyclery.” Sporadic updates since 2012 after starting (daily) in 2008. 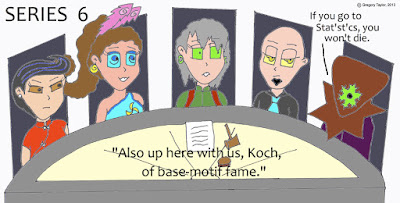 Those above websites themselves had some links going out, which seemed to match the tone of "comics that educate". Plus there's a few I know of that haven't been mentioned yet. So here's a section for those one degree separated from Ben Orlin.


“My hub for things intended to entertain, inspire, or possibly even induce laughter.” Tech/Science related. Currently running (since 2008).

13. (x, why?).
“A webcomic of math humour, school life and general geekiness.” Math related, with puns. Some anthropomorphizing of numbers/shapes. Currently running (since 2006).

14. Cesium Comics.
“A webcomic focusing on a group of physics graduate students in a fictional version of Oklahoma.” Has time travel. Pretty sure it’s currently running (since 2012).

15. Beatrice the Biologist.
“Cultivating curiosity and appreciation for science and nature one giggle at a time.” Currently running (since 2009).

16. Hark! A Vagrant.
History comics. Started around 2007, seemed to go on hiatus last year as the author does other projects.

17. Bird and Moon.
Science and nature cartoons. Currently running (existed in 2013, not sure as to start).

18. Extra Ordinary.
A comic about Li and her cat Shoelace. Currently running (since 2009). 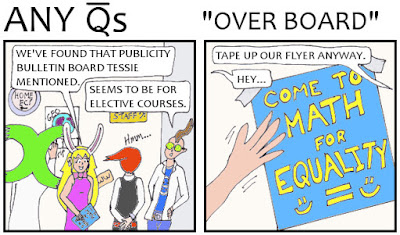 Also, Joseph Nebus reads the comics (as in ones you'd see in newspapers) and highlights neat math details on a regular basis. Check that out too.

And then, of course, there's this site. Any ~Qs, formerly Taylor's Polynomials. Began in July 2011, now at entry #325. Facebook page with 33 likes. My comic from October has 8 page views total. My pinned Twitter page from April has 0 retweets. This post may not be much of a signal boost for anyone. ^^;

My comics are returning next week. Because even though others have managed a much greater reception in less time, there's also others who have been at this much longer than I have, who are still at it. Might as well keep falling forwards.

Know of a great hidden gem out there that I missed? Feel free to mention it in the comments, someone may thank you for it. As always, thank you for reading.
Posted by GregT at 15:15 No comments: