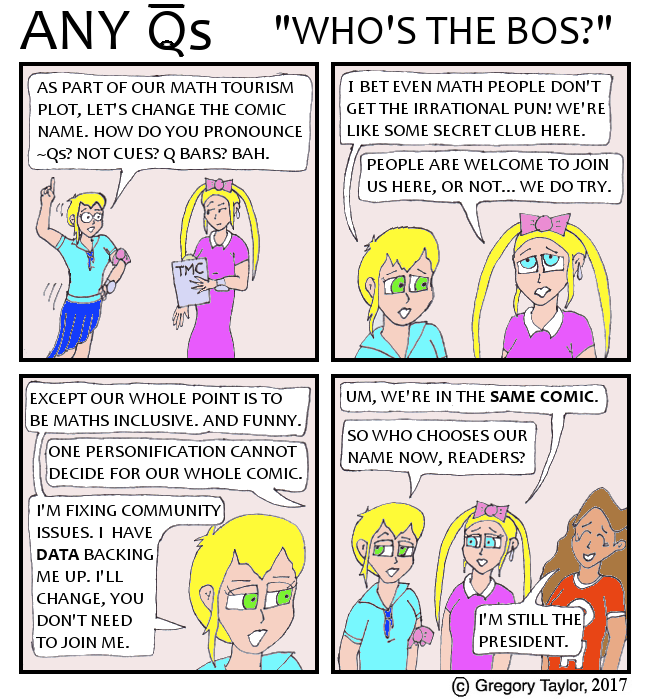 Analogies can be interesting, if imperfect. I know MTBoS doesn't have a president (its power and its pitfall), but my comic does, after the 2016 Twitter vote (that most didn't connect to this blog).

For my two regular readers who don't know the connection, this video by Jason Slowbe from last week clarifies that's not a typo in the title. For my two regular readers who know the connection, better believe I revised this dialogue many times, hope it's taken in the right spirit. I think that's everyone out there?
Oh, for anyone discovering my secret club for the first time, the hairstyles are the graphs (that's the whole point) and also check out Jason's video if you haven't already.


QUINN: As part of our math tourism plot, let's change the comic name. How do you pronounce ~Qs? Not Cues? Q Bars? Bah.
(QPARA reads TMC clipboard.)
QUINN: I bet even math people don't get the irrational pun! We're like some secret club here.
QPARA: People are welcome to join us here, or not... we do try.
QUINN: Except our whole point is to be maths inclusive. And funny.
QPARA: One personification cannot decide for our whole comic.
QUINN: I'm fixing community issues. I have DATA backing me up. I'll change, you don't need to join me.
QPARA: Um, we're in the SAME COMIC.
QUINN: So who chooses our name now, readers?
QSINE: I'm still the president.
Posted by GregT at 04:00