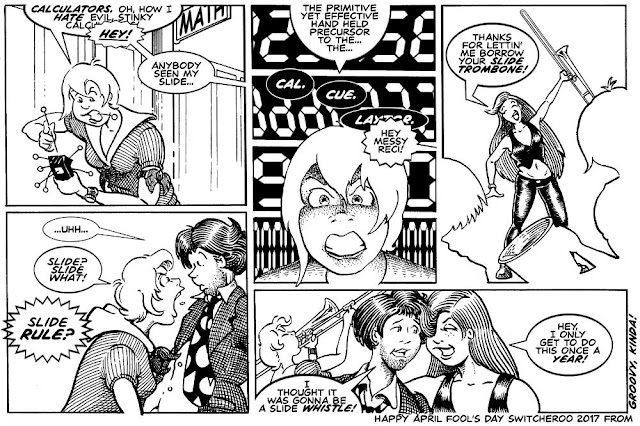 Decided to try my hand at black and white in the past week, what do you think? ...

Hahaha, okay, no, I've participated in an "April Fools Exchange". This comic (featuring the original quintic function, Quinn, being peeved by calculators) was drawn by Charlie, from the webcomic Groovy, Kinda. You should go check that out! (Then keep following the guest post thread, it's a cycle.)

As for me, I drew a strip for Rulo over at M9 Girls! Yes, this would mark the first time I've tried drawing someone else's characters in any official capacity. So go check out his comic as well - he's had a few different regular artists over the years. Thanks for dropping by!

Math trivia: Remember your quadratic formula? Well, there exists a cubic and a quartic formula... but the quintic function is the first polynomial that provably has no formula for solving. No wonder she's peeved by calculators, eh? </context>


QUINN: CALCULATORS! Oh, how I HATE evil, stinky calcu--
RECI: HEY! Anybody seen my slide...
RECI: ...uhh...
QUINN: Slide? Slide what! Slide RULE?
QUINN: The primitive yet effective hand held precursor to the... the... CAL. CUE. LAYTOR.
EXPONA: Hey messy Reci!
EXPONA: Thanks for lettin' me borrow your SLIDE TROMBONE!
(Quinn plays trombone)
RECI: I thought it was gonna be a slide WHISTLE!
EXPONA: Hey, I only get to do this once a YEAR!
Posted by GregT at 01:00