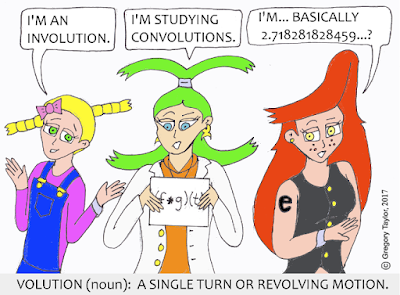 Accurate up to and including Episode 300, so SPOILERS, obviously. Though this is not as plot revealing as it was last week, for characters.

It was only starting with Series 5 that I started to give some thought to where some places might be in relation to other places. By the time of Episode 190, in Series 6, I had made a map. After all, that’s when Lyn said she was “writing out a map of our Purgatory” and that the characters were “living in a relatively similar configuration to how we were back in math”. Find a nicer version of that map below, along with some other key location data.


Note the fact that there are roads is a bit misleading, since the characters don’t drive. The closest we’ve had is Expona’s motorcycle (and sidecar). Everywhere is reachable by walking, though it would likely take a day to get from one side of the map to the other. (No exact scale is available.) Most scenes occur in the vicinity of Maud’s bar, identified with |ABS|. Presumably, there are some other buildings in the vicinity (like Hyper’s research facility, or Sine’s Council room) which aren’t specifically labelled. 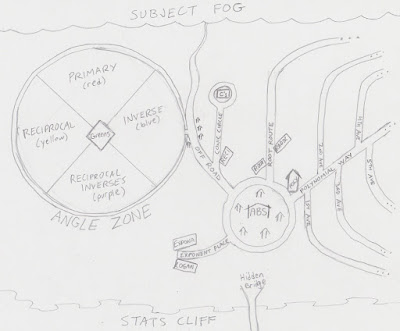 NOTES:
1. Polynomials. Episode 159 establishes that Para lives in an apartment. (It seems like it might be one room?) In fact, all known polynomials (so up to degree 6) live in that building, located at the base of Polynomial Way. Their polynomial children (x+1, 2x+1,5x-2, etc), referenced in Episode 101 and seen in Episode 259, live on the avenues which split off from Polynomial Way. All streets march off towards infinity, implying that you can never really enumerate all children.

2. Conics. They all live in the same mansion, which lacks right angles and consists of different conic sections. (Lyn found a path to Hyper’s lab using some Transverse Axes in Episode 39.) Part of the exterior is seen in Episode 237, though that was before unification, so it may appear a little different now. The Conics had also rigged an exterior alarm system, seen in Episode 44, and I suspect they’re positioned on a hill, though that’s not canon. Reci lives just down the road, being a hyperbola.

3. Trigonometry. Having their own zone, they don’t interact as much with the others, the Conics being the closest. (Tangent was said to have an external rental property as “Slope” in Episode 60, and Expona visited the “Bowditch” in Episode 244 before going in, so there must be some structures by the Off Road.) The place is a mashup of “Wizard of Oz” and “Star Trek” in terms of the locations and colour scheme. In the middle is “origin central”, where the older archaic trig (greens) hang out. No specific home location can be given for the trig in charge - as Circe said in Episode 62, “They’re constantly on the move”. Either all regional houses in the AZ are similar, or trig don’t have much material wealth to carry with them (or both).

4. Other Functions. Like 'Polynomial Way', the 'Root Route' heads to infinity, implying an uncountable set. Root lives near the base, then Radik... and presumably there’s structures to allow for a 4th root, et cetera, despite them not being formal characters. Opposite the downtown core to Polynomial Way, Exponent Place is a dead end. Expona only needs one house, as she can become all manner of different bases and transformations; if there are “children”, as with polynomials, they have never been referenced. (On the other hand, Para can transform too.) Meanwhile, although Logan spends much of his time in his gazebo Base (see below), presumably he has a house near Expona where he can kick back and relax too.

5. Subject Fog. This northern area is where the explorations of other subject areas took place in Series 4, with random, nebulous encounters of other personifications. The Beta Group likely never strayed far from the Off Road. Circe and Elly ran off this way towards the end of Series 6 and disappeared.

6. Stats Cliff. Called that because if you fall off, you’re “just a statistic” - unless you can fly out, as Para did in Episode 175. The “hidden bridge” was discovered by Reci in Episode 199, and it leads to the Jump Gate and Dial Out Device. Episode 218 provides the best look at that small plateau, along with the Gate, and a Hyper Jumper.


Since it’s effectively a ship, it’s worth it’s own section. The exterior was first seen in Episode 106, resembling a gazebo, referred to by Logan as the “crow’s nest”. It is possible to have the subscript hatch open while the base is in flight. There is a phaser ring around the blue light at the top.

The best shot of the bridge occurred in Episode 150. The ladder at the back comes down from the hatch above, implying a lack of wheelchair accessibility, though gravity can be modified on the bridge, as a work-around. There are three consoles at the back, for Engineering, Security/Weapons, and Science. Opposite to them is the main view screen. In between is Logan’s purple easy chair, and another hexagonal console for navigation and operations. (An early version had a side exit towards engineering; this was scrapped.)

The ladder at the back continues down into what must be some sort of complex hallway system. As ParaB said in Episode 110, “a single new room increases the complexity by a factor of ten”, and it takes some time for characters to get from one place to another, implying the rooms aren’t stacked on top of each other.

Such rooms would include: (1) a medical bay, where QT had conversations with some characters; (2) an engineering room with sliding doors, where Radik and Csc argued; and (3) living quarters, where the Step Functions were confined. Presumably the quarters are more functional than comfortable, as the characters preferred to stay in the Hilbert Hotel after arriving in Fractal City.

There may be other rooms within the ship, but (unless I missed something, which is possible) they have not been referenced. For instance, I’m pretty sure there isn’t a swimming pool like in the TARDIS, but you never know.


Elizabeth Weierstrass explained about the network in Episode 192. There are at least eight jump gates. Travel between them is not instantaneous, meaning one could be lost in hyperspace (think “Babylon 5”), but it’s faster than any alternatives. They can be powered down, thus may work intermittently, but take about 1.21 gigawatts to activate. (After activation, they pull in minimal power.)

The gates connect the following locations:

1. Fractal City. Their Jump Gate is located beneath the X-Mansion. Down there with it, is a control room, an interrogation room, a place to store Hyper Jumpers... it’s basically some crazy cross between StarGate Command and Xavier’s School for Gifted Youngsters. Other notable locations in the City include the Overline Bar, the Hilbert Hotel... and not much else is known.

2. Lesser Used Functions. This is where characters like Mae, Mink, Con... and even Gamma (not canon, but pretty sure) are from. It has never been seen. Also not seen, but strongly implied (by Julia in Episode 172) is that Fractal City is connected to this place via a “Heighway”. Meaning the portal is simply a faster route. (Do fractals drive? I’m not sure.)

3. The Steppe. This is where Signum, Hevvi, and Flora have a house. There may also be discrete functions living in this area, but that’s only a vague idea, far from canon. It may be possible to get from the Steppe to the other locations without portals, but there is no formal road. That would explain how Logan’s base crashed in the midst of nowhere, after leaving the Steppe.

4. Statistics & Probability. This gate is password protected. The fractals were not authorized to provide it - in fact, in the canon side story, the password was changed, barring them from accessing this location as well. Implying no way to otherwise access the land of Statistics. It’s not clear what this place looks like.

5. The Argand Plane (the Complex Plane). A place for plotting with the x-axis as reals and the y-axis as imaginaries. Nothing further is known.

6. Unknown 1. Acts as a beacon. Password protected. Non-canonically, I’ve wondered if there’s a Polar Plot out there somewhere. It may not have functions living there, but turns visiting functions weird. If so, the fractals have some knowledge of what it would do, based on the image shown to QT in Episode 196.

7. Unknown 2. Acts as a beacon. Password protected. Non-canonically, CF had to come from somewhere other than the Lesser Used Functions. Maybe this gate has something to do with sets? But then, maybe that’s part of probability instead. Who knows?

8. Math Subject. On the plateau off the edge of the cliff, it was added to the network by the main characters. But as Can-Tor determined in Episode 204, it lacked a regulator, and would have imploded, causing trouble to the existing network. It was taken offline, by being deliberately damaged. Although Can-Tor said it looks “beyond repair”, she also said the flux capacitor was scrap, yet it was retooled to send Logan’s Gazebo back in time.

Con was also seen using a portable portal device (as was Sine in the canon side story). Presumably these devices don’t let a person pop in just anywhere, in fact, my suspicion is that a person might have had to visit the location in some other way, to punch in the proper co-ordinates. But that’s non-canon, so as with anything else that hasn’t formally appeared, the logistics could be modified to suit a future plot as needed.


This post, and the previous one, have summarized all characters and locations. The plan is to launch Series 9 (e-Volution) next week! It will feature the return of an old character, along with a reference to the Analemma - both things you would already have been tipped off about by looking at the 2017 banner for the Facebook page. Just saying.

Accurate up to and including Episode 300 (end of Series 8), so SPOILERS, obviously. Serial characters (entries 1-222) are listed first, followed by their WebComic counterparts wherever they exist (entries 223 on). Unification occurred at Episode 254, not quite doubling the cast. But don’t let me stop you if you have your own personified math characters in mind out there too... inspiring other versions is kind of the point, frankly.

Incidentally, this info took over 12 hours to compile and cross-check, not even including the drawing. Each drawing took at least a half hour to sketch, scan/position and colour (inking and erasing pencil lines felt a bridge too far, but including colours helps me for having them all in one place). That’s why some images are still to come (may come by the end of the week).

Has it really been almost six years? I must be out of my mind. With thanks to my wife, as I was a bit of a hermit for a couple days over Easter. Also to my 10 (?) regular readers. And you, thank you for dropping by! You can now vote for the serial part of this story on “Top Web Fiction”. (I'm working on the WebComic equivalent.)


Thanks for coming by! Feel free to email (mathtans @ gmail) or leave a comment if you have thoughts. You can also like the Facebook Page to be notified of updates (generally every Monday).
Posted by GregT at 16:00 No comments: