The last Thursday of February I ran a FanArt extra (Hyper), with a few comic "Hyper"links as well (see what I did there?). Might as well keep tossing in that sort of unscheduled update - in particular because I commissioned art last May 2016, at Anime North.

Despite scanning these works in last June, I never got them onto the blog. (Partially as I'd been focussed on the Cubic Formula Song Parody, now at over 250 views.) Better late than never! Here they are.

With my usual focus on Para pictures, I'd started feeling that Expona needed a chance to shine (as in the latest derivative arc), and since she was an election candidate at the time, she was the subject of two commissions.

Alert readers might remember a cropped version of that image from the podium during "Word Choice". The next commission is actually  QExpona (or 'New Expona')... the visual differences are subtle (as noted here), the main ones being eyeshadow and a zipper vest instead of a button-up.

Of course, you're certainly welcome to draw your own version of an "exponential" personification, and it doesn't need to resemble mine! Whatever helps you enjoy or understand mathematics. :)

Thanks for dropping by, feel free to leave comments, hope we'll see you in April.
Posted by GregT at 09:00 2 comments: New function for this comic, at least. No Bones about it. Fun fact, anyone remember when Reci/Rhys decided to change his name? It was a student who suggested Rhys ("Reese") as a better one. But I never changed the label tag.

Also, yesterday (March 26) was apparently “Make Up Your Own Holiday” Day (I’m not even kidding). A number of GoComics cartoonists went to town on that, read about the roundup (and see their strips) at that link.

ARCTAN: Three problems with QQuinn’s cure. First, QT will need two shots; not sure how she’ll react to that.
ARCTAN: Second, due to Tangent and QArcSin’s power shift, their integrals are now messy logarithms instead.
ARCTAN: Third, Rhys has decided s/he prefers the new form!
QSIN: That’s okay. An old Rhys gets promoted in his/her place.
QHYPER: Zzzz...
PARAB: There is no old Rhys. The reciprocal's name was Reci.
QLYN: So? As a new function, won’t s/he need a new "-tan" name?
ARCTAN: I’m a doctor, not a linguist!
Posted by GregT at 04:00 No comments: 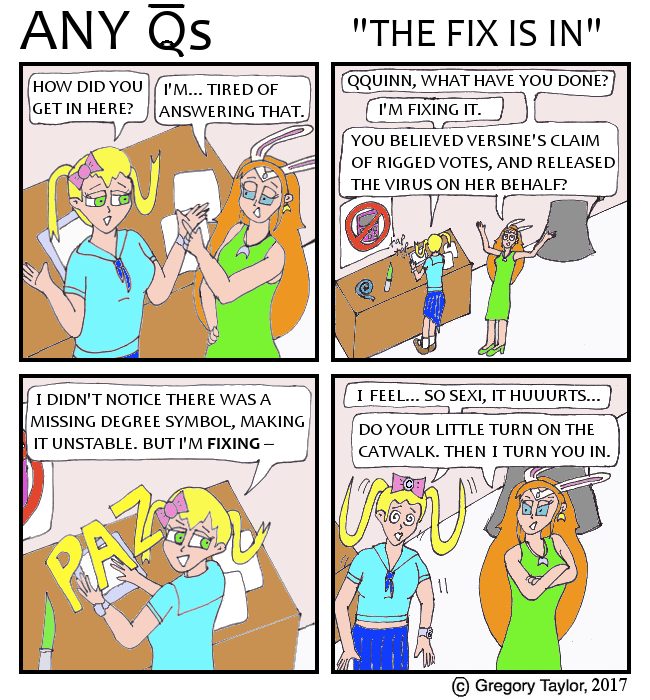 Not too Sexi for that song reference though. (Not this song reference. I was going for an AMV Friday. On Monday.) Did you notice the extra update last Tuesday? I can't track days of the week.
2017 is a sexy prime though (with 2011). Did you know that?

QQUINN: How did you get in here?
PARAB: I’m... tired of answering that.
PARAB: QQuinn, what have you done?
QQUINN: I’m fixing it.
PARAB: You believed Versine’s claim of rigged votes, and unleashed the virus on her behalf?
QQUINN: I didn’t notice there was a missing a degree symbol, making it unstable. But I’m FIXING--
SFX: (PAZ)
QQUINN: I feel... so Sexi it hurts...
PARAB: Do your little turn on the catwalk. Then I turn you in.
Posted by GregT at 04:00 2 comments: 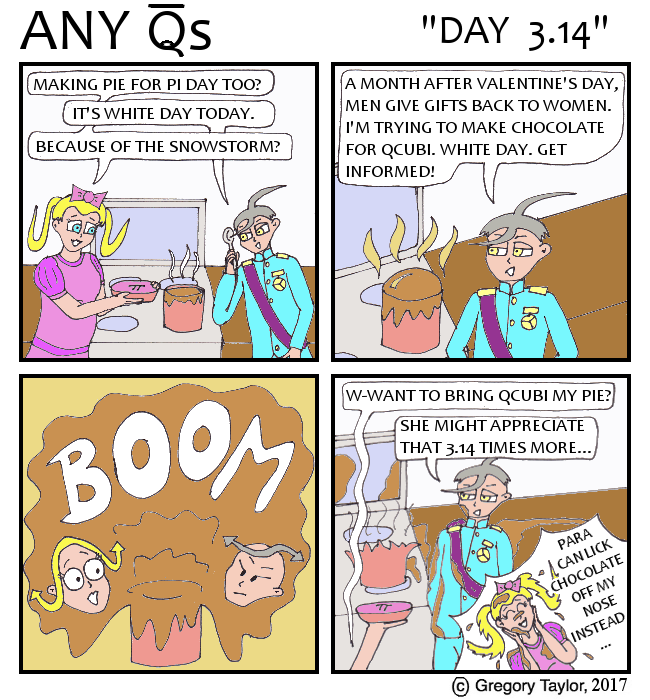 All the news today seems to be about one of the items in the first panel, so I came up with this bonus on the fly. Yes, it should be white chocolate (or marshmallows) but I didn't want too much white in the panels. Also, I don't like white chocolate. I wonder why I think of QT when I think kitchen disasters...

In other news, I've spent the last day adding navigation links to all prior serial parts. Hopefully that encourages some reading of prior entries?


QQT: Making pie for pi day?
QRADIK: It’s white day.
QQT: Because of the snowstorm?
QRADIK: A month after Valentine’s Day, men give gifts back to women. I’m trying to make chocolate for QCubi. White Day. Get informed!
SFX: *BOOM* (chocolate explosion)
QQT: W-Want to bring her QCubi my pie?
QRADIK: She might appreciate that 3.14 times more...
QQT: Para can lick chocolate off my nose instead...
Posted by GregT at 13:00 No comments: 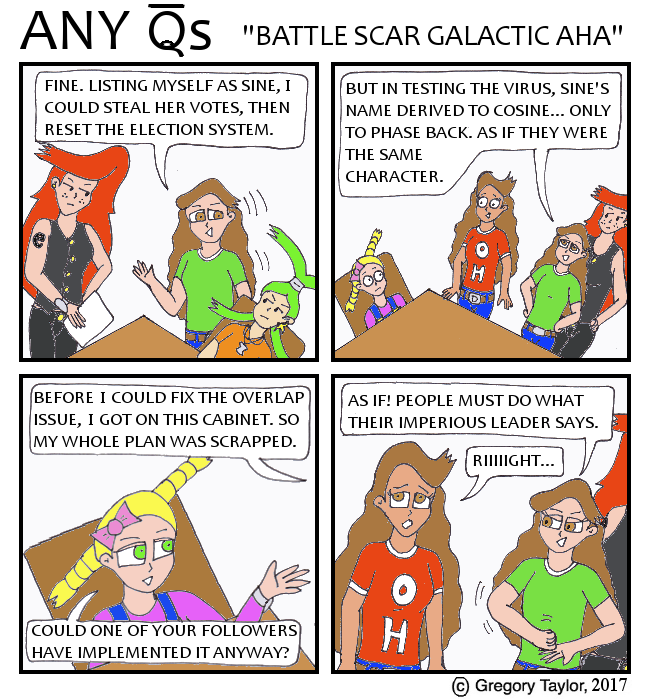 Not the first time Versine has started referencing that show. I think I’m poking some fun at US politics here? It’s hard to tell these days.

This ties together the derivative plot, Sine's dual identity, and the pre-election strips. Hopefully in such a way as it seems pre-planned, despite me having no script until these comments in early January 2017.


VERSINE: Fine. Listing myself as Sine, I could steal her votes, then reset the election system.
VERSINE: But in testing the virus, Sine’s name would derive to Cosine... only to phase back. As if they were the same character.
(QLyn and QSine exchange a look)
VERSINE: Before I could fix the overlap issue, I got on this cabinet. So my whole plan was scrapped.
QLYN: Could one of your followers have implemented it anyway?
VERSINE: As if! People must do what their imperious leader says.
QSINE: Riiiiight.
Posted by GregT at 04:00 No comments: 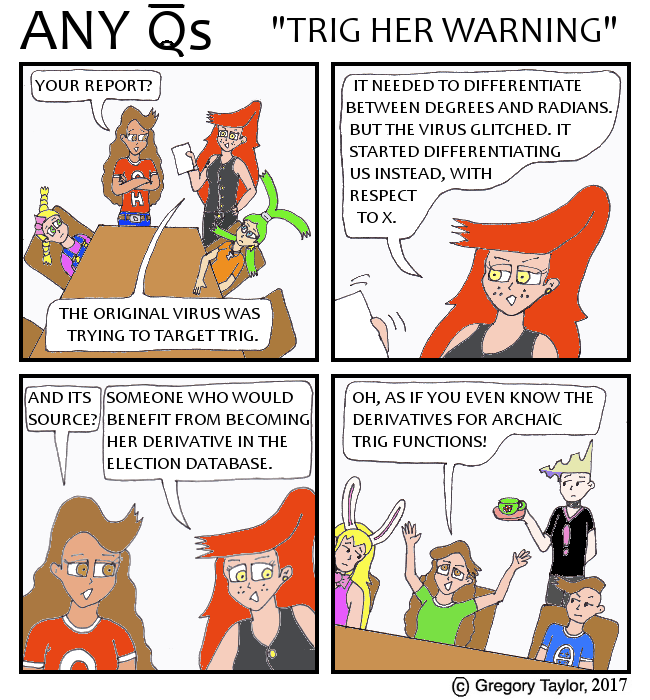 If there’s a Trig plot, it’s probably Versine. She has a history. A long history. That said, her derivative is relevant, and you now have all the necessary pieces. Can you solve the puzzle?

Incidentally, I don’t know who’s sitting on the other side of that table. I still need to decide who was chosen as minister for the Environment plus one other department (Agriculture maybe?). Thoughts?


QSINE: Your report?
EXPONA: The original virus was trying to target trig.
EXPONA: It needed to differentiate between degrees and radians. But the virus glitched. It started differentiating us instead, with respect to x.
QSINE: And its source?
EXPONA: Someone who would benefit from becoming her derivative in the election database.
(all look at Versine)
VERSINE: Oh, as if you even know the derivatives for archaic trig functions!
Posted by GregT at 04:00 2 comments: