“Madam President,” chorused both QT and Hyper, coming to attention as QSine entered their lab.

“At ease,” QSine said, gesturing uncomfortably. “I’m not a Transcendental Pi-Type Being.”

“I noticed,” Hyper remarked. “Seeing as we’re not four panelling today. Are we a serial again?”

“No. We’re a webcomic with curiosities,” QSine said. “The thing is, last summer’s ‘Cubic Formula Song’ just reached over 100 views on YouTube. To build on that, I’ve heard you do a traditional holiday singalong parody at Christmas.”

“Build on? Ha! My holiday statistics special from last year has merely 36 views,” ParaB remarked, her incorporeal form floating in through the wall. “And after two years, Expona’s ‘Polar Plot’ is only nudging past 80.”

“Oh.” QSine tugged on the waistband of her holiday sweater. “Well, never mind then.”

“Except maybe it’s not about views,” QT broke in. “It’s about coming together. And it’s about mathematical tradition. I mean, we’ve been going for over five years now - why stop in year six?”

“Because we’d have to pull things together in under a week?” Hyper remarked. 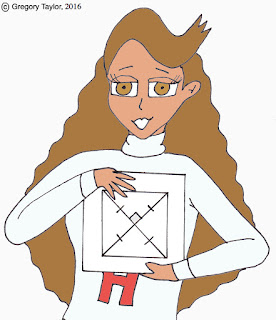 “My mornings are free,” QT insisted. “And I maybe have an idea.” She shuffled through some pages on the lab desk and handed a sheet to QSine. “Here, pose while holding this.”

QSine took the sheet. “How, this way?”

QT smiled. “Sure! In fact, if you can get our counterparts together, I think we can have an annual special after all. Blending both personification groups. Okay?”

“I hope you know what you’re doing,” ParaB said.

“Why do we have to cut these things so damn close?” Hyper sighed.

QSine simply smiled. As she was the new personification president, it would be no trouble getting the other functions to participate.


LYRICS LINK TO "DO WE HAVE A SQUARE HERE"

FEEL FREE TO COMMENT BELOW!
Posted by GregT at 14:37