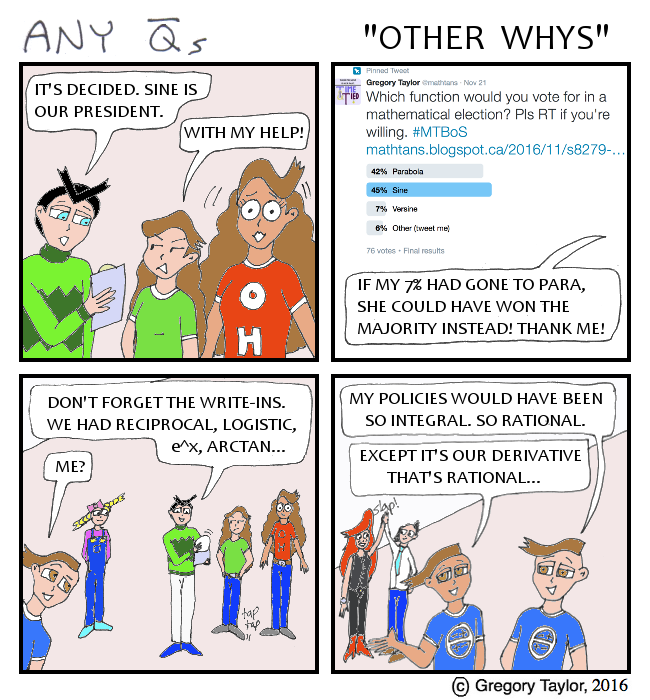 Today’s punch line courtesy Josh Fitzgerald’s vote for ArcTan. Josh also pointed out ArcTan has two horizontal asymptotes, and sends a compact interval to the whole real line. Justin Brown noted e^x makes differentiation easier. Hope Gerson said the logistic function was cool because it goes up quickly then evens out at the top. And Chris McCord liked that reciprocal was it’s own inverse.

Thanks to EVERYONE who voted - and especially to the 8 people who read last week's comic. Sine’s full reaction is next week.

MAUD: It’s decided. Sine is our president.
(QSine looks shocked)
VERSINE: With my help!
(Poll: Parabola 42%, Sine 45%, Versine 7%, Other 6%)
VERSINE: If my 7% had gone to Para, she could have won the majority instead! Thank me!
MAUD: Don’t forget the write-ins. We had reciprocal, logistic, e^x, arctan...
ARCTAN: Me?
(background, Expona and Rhys High-5)
ARCTAN: My policies would have been so integral. So rational.
QARCTAN: Except it’s our derivative that’s rational...
Posted by GregT at 01:30 2 comments: 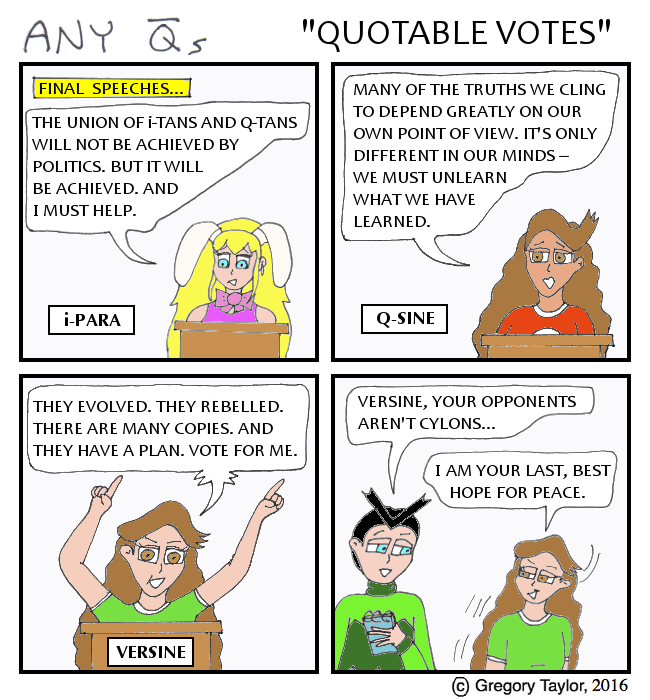 Para is quoting Spock from "Star Trek: TNG". Sine is quoting Jedi from "Star Wars". Versine went for "Battlestar Galactica" followed by "Babylon 5". I've actually been waiting on a BSG reference since news of the film reboot.
Want to affect the storyline? You can Twitter Vote for the candidates, or comment below! (Their previous debate was here.)

??: Final speeches.
PARA: The union of i-Tans and Q-Tans will not be achieved by politics. But it will be achieved. And I must help.
QSINE: Many of the truths we cling to depend greatly on our own point of view. It’s only different in our minds - we must unlearn what we have learned.
VERSINE: They evolved. They rebelled. There are many copies. And they have a plan. Vote for me.
MAUD: Versine, your opponents aren’t Cylons...
VERSINE: I am your last, best hope for peace.
Posted by GregT at 12:00 No comments: 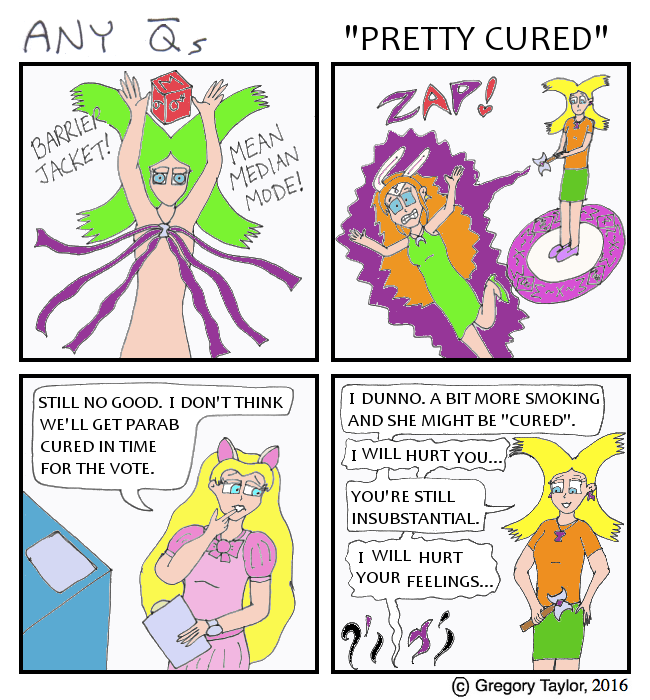 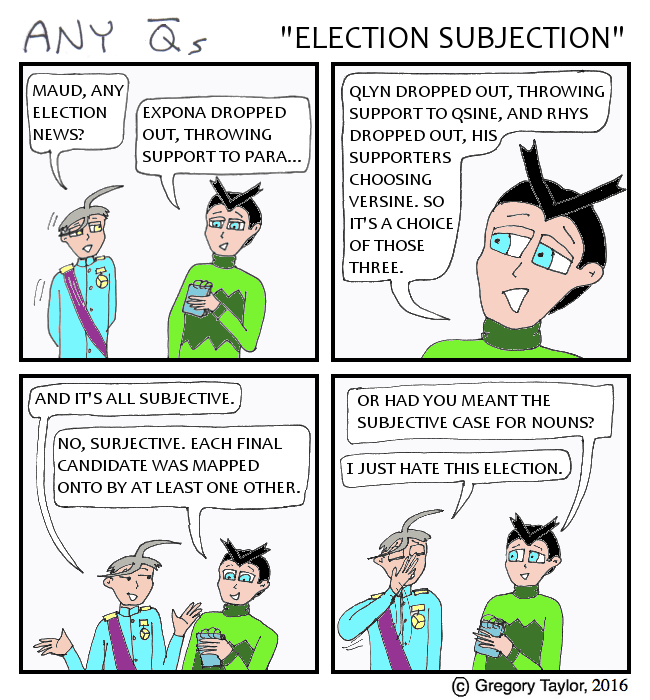 According to my research, the subjective (or nominative) case means the noun is the subject of the verb, as in “I hate”. Meanwhile surjective means what Maud said. And alert readers may recall the old serial played around with Jectives before, back in Entry 123.

Coincidentally, there is a bi-election coming up in my riding soon. There’s also that thing happening down in the United States tomorrow.


QRADIK: Any election news?
MAUD: Expona dropped out, throwing support to Para...
MAUD: QLyn dropped out, throwing support to QSine, and Rhys dropped out, his supporters choosing Versine. So it's a choice of those three.
QRADIK: And it’s all subjective.
MAUD: No, surjective. Each final candidate was mapped onto by at least one other.
MAUD: Or had you meant the subjective case for nouns?
QRADIK: I just hate this election.
Posted by GregT at 18:00 No comments: