"Shouldn't we have given that Away Team communicators or cell phones or something?" Radik asked Logan. "I mean, we don't know what's going on out there."

The redhead sighed. "It's been less than ten minutes. Why get so impatient?"

"I can pull up a full exterior view, I think," ParaB offered. "Now that we're out of hyperactive space. We'll see them if they're still outside."


ParaB poked at buttons on a couple of the consoles, and the video monitor sprang to life. Everyone leaned forwards in surprise at the sight. A slightly heavyset girl wearing glasses stood a short distance from the gazebo. Her hair sported a pair of twintails that shot out perfectly horizontally, the hair itself bifurcated into a black side and a white side. She wore a simple track suit that was similarly coloured.

Of rather more interest though was the fact that Sine stood on one side of her, helping to file the girl's nails, with Cosecant on the ground polishing the girl's boots, even as QT draped herself over the girl's free arm. While they watched, the catgirl murmured, "Oh, 'Evvi," and went up on her toes to plant a kiss on the girl's cheek. 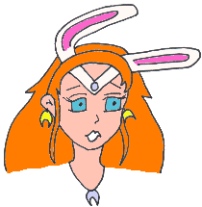 "Wow. That new arrival is gorgeous," Radik murmured. "Permission to join the team outside?"

"Yeah, I think I'll head out too," Logan said, rising from his chair once more.

ParaB's eyes went wide. "The heck?" she shouted, hurrying to block the guys' passage to the ladder. "Okay, obviously this newcomer is some negative influence!"

"Let us by. Negative or not, we're positively attracted!" Radik countered with a glare.