Radik peered closer at the Engineering readout on his console. "Hey, Logan, do we have enough fuel to get wherever we're going? The disodium crystal count is looking low."

Logan glanced over from the central chair. "The gazebo will get there whenever she gets there. There's some bags of salt in the engine room if absolutely necessary."

Sine blinked as she reentered the bridge. "Hold up," she said. "Did you just imply dichlorine was a waste product of our engines?!"

"Not exactly," the redhead retorted. "Chlorine gets routed to the pool room."

Cosecant shook her head. "I just hope we reach our destination soon," she sighed. "I can't test the new phasers while we're in this... this hyperspace." 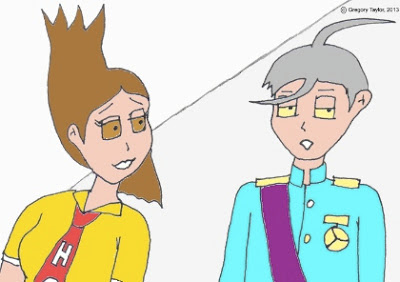 Suddenly, the bridge was bathed in a soft blue light. "Blue alert!" Logan called out, standing up. "The ship's landing! Report to code blue stations!"

Sine hurried to the navigation console, as the other relations turned back to their own boards. About a minute later, ParaB and QT entered the bridge, the latter hopping as she pulled her other pink boot back on. "Wh-What's going on?" the catgirl asked.

"Gazebo's materialized near a small cottage, on what looks like a grassland plain... the area's devoid of any trees," Sine stated.

"Of course," ParaB said, nodding slowly. "It's logical that we'd find a function like Signum living on a steppe."