Fortunately, when the electromagnetic pulse from Hyper's railgun went off, the only major casualties were Maud's hairdo, Hyper's dignity, a warped tuning fork, and a hole in the ceiling the size of a quarter. Of course, given that the device exploded seconds after that, there was still a need for cleanup to occur. 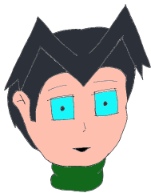 "It's fine," Maud assured the green haired scientist a few days later, as he finished repairing a chair. "I'll just straighten my hair out again, maybe."

"See, I could help with that!" Hyper assured. "I designed Circe's hair curlers."

Maud's eyebrow twitched. "Yeah, but no, I'm good. If you want to help with something, maybe promote our Math Greatest Hits video? It's just gone live."

"Won't help. Another flash in the pan video, like that Khan one," Expona called out from the corner of the room, where she was playing solitaire. "Even if viewers do find their way here, you're not giving enough incentive for a subscription! Now, if you'd had ME sing when Miss Para Noia backed out..."

"Para said she preferred me doing the cover versions," Maud responded with a shrug.

"Speaking of Para," Cosine said, walking into the room, "Has our local quadratic had any telepathic communication with ParaB lately?"

The absolute value shook his head. "No word out of Logan's base at last check," Maud answered. "For all we know, they're experiencing relative displacement in time as well as space."

"Oh," Cosine sighed. The concern over her twin sister was obvious. "Well... let me know if anything changes."

With that, the brunette trig walked back outside and glanced up at the sky. There was no way for her to know that a certain gazebo was about to arrive at it's destination.