As it turned out, when Lyn and the Trigonometric functions emerged from the building, they found that Versine had already been captured. Lyn almost didn't recognize her at first, as the function had removed her earlier accessories and changed into a green top.

"I saw her lurking in the building across the way," Secant remarked, holding Versine by the shoulder. "Oh, and Exsecant took a shot at us, but my sister's got her on the run."

"See how much can get done when I'm in charge?" Circe said smugly. Secant rolled her eyes.

Sine and Cosine exchanged a glance, and each raked their fingers back through their hair before stepping forwards to stare at Versine. "What do you have to say for yourself then?" the twins chorused.

Versine merely smirked. "You have nothing on me. Merely suspicions." 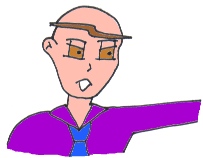 "Objection!" Toc said, lifting an arm high and pointing at the brunette.

Everyone turned to look at him, causing his gaze to turn sheepish as he rubbed the back of his neck. "This would look better if I had a more imposing hairstyle. Or any hairstyle." He cleared his throat. "My point stands though! If you had no hand in this, Versine, why are you here?"

"I have to be somewhere," she shot back. "Despite what the world seems to believe, I still exist!" She put her hands on her hips. "I don't care how much people redefine mathematics, doing silly things like changing the meaning of the word billion... I'm not going away!"

Sine grimaced. "Moreover, she does have a point. We've no proof, and we can't waive her rights."