"Your mind to my mind. Your reciprocal to my amplitude. I am taking your form and combining it with my own..." 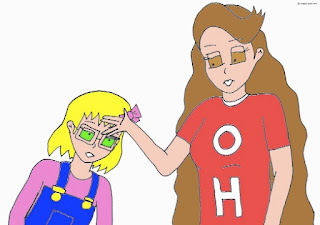 With that, it felt like the two fingers that Sine had placed on Lyn's forehead actually slid right inside her head. Lyn gasped despite herself, though Sine's attempt to replicate her didn't really feel painful. In fact, it also allowed Lyn to peer back into Sine's mind.

It was there that Lyn first saw the form of sin(x)/(x). Saw how its maximums and minimums were defined by derivatives. And saw that, while the quotient rule produced the equation (x cos(x) - sin(x))/x^2, upon setting it to zero it would reduce those extremes down to one simple equation. x=tan(x), x not zero. Equating Lyn with her own slope.

But along with that, Lyn saw more. The blonde realized that the Primary Trig Twins truly did care for Tangent. And that they had not fully realized how hurtful the nickname of Tan-tan, or any of their other teasing, had been in the past. They truly did rely on Tangent for guidance and navigation. And missed her.

Sine's fingers drew back, and when Lyn was able to focus back on the brunette, she saw that the wavy hairdo had been temporarily remolded, and a necklace with Reci's image on it had appeared. "Here we go then," Sine(?) said, exhaling as she turned towards Tangent. "I think either this takes no time at all, or we never quite make it..."

"Zeno would have a field day with us," Cosine remarked.

Email ThisBlogThis!Share to TwitterShare to FacebookShare to Pinterest
Labels: Cos, Lyn, Sin