Cosine began to snap her fingers. "There's an idea in that though. Maybe in the future someone can invent a time machine, and come back to save..."

Which was when, at three seconds on the timer, the TI n-Spire suddenly exploded.

Lyn screamed and instinctively shielded her face. So it took a moment or two for her to realize that she hadn't yet been vaporized. "Oh, Tangent," came the twin gasps of both Sine and Cosine. 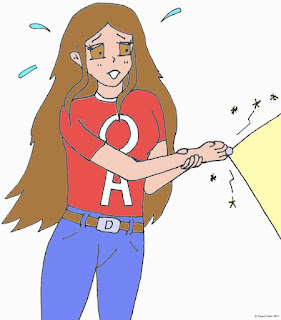 Lyn quickly turned her attention back to the bomb. Which looked like a small fireball, currently encased in a cone of energy... a cone that was originating in the ring that Tangent wore on her right hand. Which she had pointed at the explosion. Sweat beaded on the brow of the young girl, and she shook, obviously under a great deal of strain.

"Of course! Our asymptote rings!" Cotangent said, looking down at her own hand. "Capable o' causin' something to approach us but nae actually arrive!"

"But eventually the object will be so close that it won't matter!" Sine reminded. 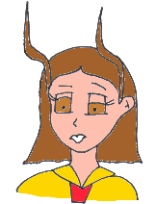 "Still buys the rest o' you the time ye need," Cotangent concluded. "Because while ye have no asymptotes, me and Tan have an infinite number o' these..." She pointed her own ring at the bomb, a second cone soon overlapping with the first, and the explosion - which Lyn realized had grown slightly in those last few seconds - seemed to slow even more. Tangent flashed a quick smile over at her reciprocal, though it was strained.

"Oh, rad!" Cosine remarked.  There was a pause.  "No, seriously, guys, radian mode.  The asymptotes could occur more frequently then."